The weekend to be

It looks like a great weekend at the Lake. Highs in the mid to upper 70s and only a 20% chance of rain on each day. Which translates into a 96% chance of at least 1 clear day, and a 64% chance of two clear days.

Unfortunately for me I won't be able to make it. I'm on my way to Florida with Christina and my Mom & Dad.
Posted by James No comments:

Email ThisBlogThis!Share to TwitterShare to FacebookShare to Pinterest
Labels: The Weekend to be, Weather

The Weekend that Was

Christina, Jenny and I arrived at the camper around 10:30pm on Friday night. We greeted with the familiar image of Lollie, Marc, Nate and Ron sitting around the front fire and waiting for the remaining check-ins. It was good to see Ron, as this was his first trip to the Lake this entire season, and things just haven't been the same without him. After consuming a beer or two and some conversation around the campfire it was time for bed.

Saturday morning was a lazy morning, and I'm pretty sure I wasn't out of be until at least 9:00am. Once I was up and moving Christina and I headed into town to pick up some donuts and assorted other breakfast type food. When we arrived back at the campground we helped Ron assemble the "Thunderdome" around his camper, and generally took it easy.

Ron and I finally started to find some motivation around 10:30am and we made it to the CCC parking lot around 11:00am, after getting Ron his park sticker for the year. The hike up to the bluff went fairly well. We had decided to do a "tour of the East" -- which to us means leading a few routes on several formations. Since it was Ron's first day out and I had gotten a few routes in already this season we decided it would be best for me to lead. I was apprehensive (this would be mt first day of leading for the season, and more to the point, my first day leading since last August).

The tour started on Full Stop (5.6), the scene of the now infamous (at least among my closer climbing friends) "mud incident" -- which Ron was kind enough to remind me of shortly before I began the route. It's good to return to old familiar routes when you haven't been climbing in a while. It's like seeing an old friend you haven't seen in a while. It's a bit awkward at first, but eventually the familiarity overcomes the awkwardness and a pleasant conversation ensues. After bringing Ron up he complimented me on not being too rusty, and I in turn admitted that there had been a little ""...wind in the wires..."

Next on the docket was Peter's Project (5.7), but a group had just thrown a toprope on it, and they weren't too keen on the idea of us leading through. So we headed on down the bluff toward Foreplay (5.5) where we found a Boyscout troop or some other such nightmare setup all over the bedroom amphitheater. We still asked if we could lead through and to my surprise the guide was more than okay with it. So we quickly led through (Ron even had to tell me to take my time) without incident and discussed where to head next.

We decided that since we were so close The Pretzel (5.6) we should just scramble down Leaning Tower Gully and do that. After a quick lunch/smoke break we racked up and did the route, which was as awkward as I remembered, but good nonetheless. The only real incident on this route was the "sketch factor" added by the Scout troop stumbling up and down Leaning Tower Gully kicking rocks down left and right. This didn't present a real danger for Ron and I as we were along the side of the gully and out of the fall line, but it was exceedingly annoying.

After completing The Pretzel we headed back down the bluff toward Peter's Project and found it in the best conditions one could hope for on a beautiful Memorial Day weekend -- open. At this point Ron's lingering elbow-itis was flaring up, so I built an anchor above the route and he wandered around to the base. The plan was that I would rap the route, lead it, and clean it on lower. Trouble is Ron had the rope in his pack, so after I was done building the anchor I had to wander down around to the base as well. The route went well, and it made a for a nice end to the day. We packed up and headed for Wheeler's, having done four routes in about four hours car to car.

We spent the rest of the day Saturday doing site maintenance, and grilling out in full Wisconsin Memorial Day weekend style.

Sunday was another lazy morning, and Ron had to leave around 10:00am to go to Kato and Pete-o's party up in Appleton. Christina and I went to Pierce's for fresh donuts again, and then started making plans for my parents to meet us at the campground for a Memorial Day weekend cookout around 2:30pm. We had a little time to kill, so we went to the Lake, I went on a long hike and Christina and Jenny went for a run.

My hike started out on the South Bluff (from the West Bluff parking lot) where I visited "The Reserve" and some of the talus fields west of the cliff bands on the South Bluff. I think I got some really good pictures of the lake (we'll see when the film comes back) . I had intended on going to the cliff bands, but ran into a section of densely forested talus field, and was tired of bushwhacking since the black flies and mosquitoes were eating me alive. So I bushwhacked my way down the South Bluff to the South Shore visitor center, and then walked over to the Grottos trail. I took the Grottos over to the CCC and then took the CCC up the East Bluff. Then I took the East Bluff trail to the North Shore where Christina picked me up.

Christina and I pulled into Wheeler's just in front of my parents, it took us a little while to get the fire going and lunch cooked, but we got it done eventually, and had a great meal. The weather started to look like it was going to take a turn for the worse, so my Mom and Dad headed out pretty quickly after lunch.

Jenny, Christina and I decided to ride the storm out in the camper, Jenny was scared out of her mind, but the storm came and went pretty fast. We were left with an incredible rainbow in the front field at Wheeler's. I took some pictures, but I'm not sure how they'll turn out until I get the film back. The rest of the night was pretty relaxed, and went by quickly. We all went to bed fairly early.

Monday morning was the earliest of the long weekend, and saw us up around 8:00am. We packed up the truck and were on the road by 11:00am. Traffic wasn't too bad and we took our time which got us home around 3:oopm. All things considered it was a great weekend.
Posted by James 1 comment:

I saw this on youtube the other day and I think it captures the spirit of the Valley really well.

http://www.youtube.com/watch?v=AkRnwO8oyBk
Posted by James No comments:

As of now, the always reliable weather.com forecasts the following data:

Here is a pic of last Memorial Day: 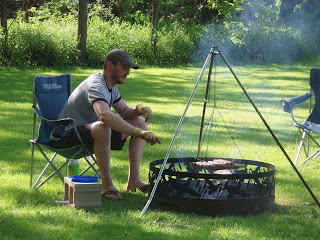 Posted by James No comments:

Email ThisBlogThis!Share to TwitterShare to FacebookShare to Pinterest
Labels: The Weekend to be
Newer Posts Older Posts Home
Subscribe to: Posts (Atom)
Instruction