DISCLAIMER: I am not a doctor, a nutritionist, or any other kind of expert so this is not professional advice - it is merely a record of what I did to lose some weight and gain a modicum of fitness. It worked for me, it might or might not work for you. Be safe, and check with a qualified professional before starting any diet or fitness program.

Originally I had planned on Part 2 of my Chasing Fitness series to be just about nutrition, but I feel that not discussing the base fitness I had accumulated prior to adjusting my diet and exercise plan would fail to tell the whole story and I want to give as complete of a picture as possible.

It should be said that my fitness program started back in the fall of 2013 when I volunteered to coach youth hockey for my local hockey club. Not wanting to be "that coach" I quit smoking so I could be a positive role model for my eleven and twelve year-old skaters. I had a good time coaching, the kids were great, and I was on the ice at least three times every week. I also got involved in the local adult pickup hockey games. Aside from that I did some cross-country skiing and easy ice-climbing in the area around my house. None of this was structured, and I did not lose any weight in that time, but I am convinced that I developed a cardiovascular base that made the transition into my structured program much easier. All told I was probably getting four to eight hours per week of low-intensity cardio and maybe an additional hour, or so, of high-intensity cardio mixed in.

The structure finally had to come to my program in early February after my friend Jay convinced me in January to join him on a climbing tip to Joshua Tree National Park. Jay is strong and an exceptional climber, so I would have my work cut out for me if I even wanted to survive a week of Jay dragging me up and down desert granite, let alone enjoy myself. Climbing is all about strength-to-weight ratio, and as such climbers can make themselves better by addressing either end of that equation, or in my case attack both.

There are many studies on weight-loss, and even more opinions. I am here to offer my opinion and back it up with my experience. I may be wrong, and I might have done some as-of-yet undiscovered damage to my body, but I feel better now than I did before I lost my weight. Essentially I had two months to get fit, and I considered losing twenty pounds to be a part of that process. I am of the opinion that weight loss is, in general, simply a matter of consuming fewer calories each day than one burns. I am sure there are tons of things a person can do to optimize the process, but it seems to me that if I put in less than I burn, I will lose weight. To that end I decided to limit caloric intake. The problem there was that I had no idea where to begin, so I turned to the internet and used this calculator. The calculator told me my goal was not prudent in the time I had, but that I was close and should limit myself to about 2,000 calories a day. 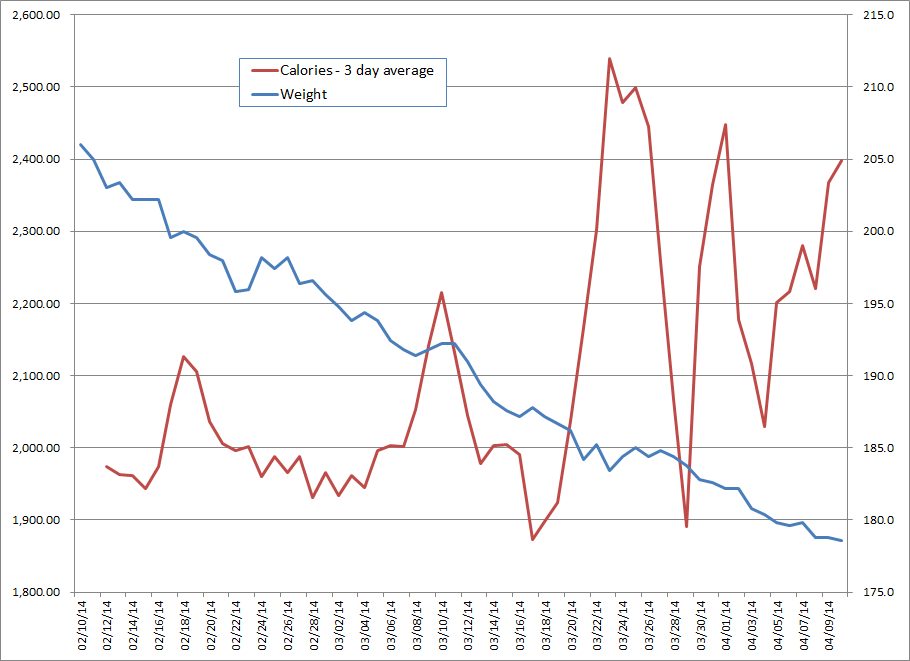 As you can see the red line representing calories starts to increase significantly after I hit the original twenty pound goal. I did a large volume of exercise in this period of time too; so the secret is not simply eating 2,000 or fewer calories per day. In fact that number will be different for everyone, based on their current size, base-level of activity, and training volume. The point is that, at least for me, consuming fewer calories than I burned resulted in rapid weight loss.

I feel like I need to make a few things clear at this point. First, in the first few days of the intake reduction I did feel very hungry, and if I was not careful to space my consumption properly I did get light-headed, but my body eventually became accustomed to burning its own stored energy (also known as fat). Second, eating frequent small amounts throughout the day made the calorie reduction easier to bear - my body was not suddenly overloaded then later at a deficit this way. Third, I was careful to make sure I was not losing strength during this time period - a part of my regular workout during this period included weighted pull-ups and I monitored the total weight (body-weight plus added-weight) to make sure my net strength was increasing - but that's a story for the next part of my Chasing Fitness series.