Thumbs up! - A belated trip report from last summer...

The first part of this post was written shortly after returning from Oregon and Washington, the balance was written later - much later. 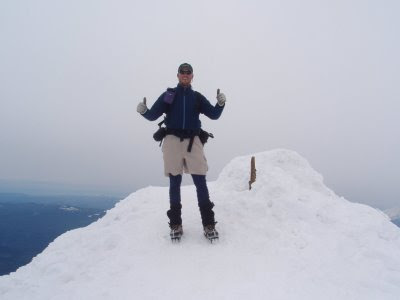 I know it's been a while since my last post, but I've been exceptionally busy during the week at work since returning from the Pacific Northwest, and I've spent the past two weekends at the Lake because Jay was back home visiting from New Hampshire. So here is the skinny on Mt. Adams and Mt. Hood. 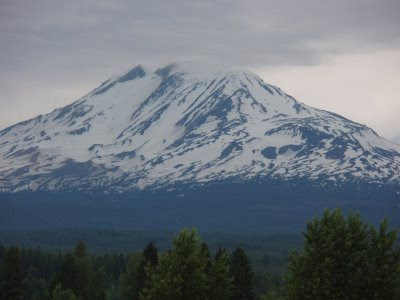 We arrived in Portland midday on Saturday, picked up the car and headed towards Mt. Adams. We stopped in Hood River for groceries, and then in Trout Lake for some final supplies. We spent Saturday night camped alongside the road to Cold Spring Campground on the side of Mt. Adams in the National Forest.


We had a leisurely start to Sunday morning, and drove back into town (Trout Lake) to pick up a few last minute items. We drove back up the road, which was open nearly to Gotchen Creek, maybe a mile from Morrison Creek, parked the car and started walking up the snow covered road. After a few miles we arrived at Cold Spring Campground, and the South Climb Trailhead. 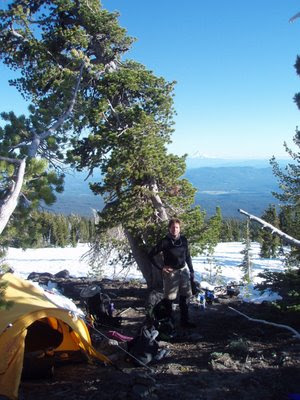 We started up the South Climb Trail and followed it until about tree line. We left it roughly where it cuts west to loop around the Crescent Glacier, and instead followed a well worn boot track through the snow up toward the east side of the Crescent Glacier. While we were walking and talking the subject of "epics" came up and I related some of my previous experiences in that department. Todd must have thought it sounded pretty cool, and he said something akin to, "I would someday like to experience an epic, not a major one, and only one, but one nonetheless."


A stunned me replied "Don't ever say that! They have a way of finding you on their own, they certainly don't need any encouragement." We continued on and eventually made camp on a pumice ridge at approximately 6800 feet, well below the Lunch Counter.

We started melting and boiling snow while we set the rest of camp up, and since we had flown in I decided to buy canisters for my stove, instead of using white gas. The isobutane started easier and seemed to burn just as well, and we continued to setup camp. Now you the reader can blame whoever you want for the epic that ensued, but I say it was Todd's fault for asking for an epic, and the fact that I incorrectly assumed one canister of fuel would be enough for two people for one night was completely irrelevant. Not surprisingly we ran out of fuel. We had made two liters of water per person, and enough extra to make a mug of water with two packets of Cup-a-Soup©, which we shared for dinner. Over our "meal" of Cup-a-Soup© we discussed the potential for the following day. We wouldn't be able to eat much, because we didn't have enough water to metabolize it, and we certainly wouldn't be able to drink much. We decided to go for it despite the setback, so we set our alarms for 2am and tried to get some sleep.

Day 3 - Monday, June 23 - The Epic Continues
Well around 4am I noticed that neither of us had woken up to our alarms, and we were behind schedule. When I woke Todd up and confronted him with this news we decided to press on, (This is where I left off previously) despite yet another setback. At some point some of you may start to question our judgement, and that's fair, but we kept a close eye on the weather and snow conditions and felt like we were still making good decisions. We made good time, and an overcast sky kept the snow firm and safe. We reached the summit in the afternoon under cloudy skies, that never let more than a mist of precipitation fly. 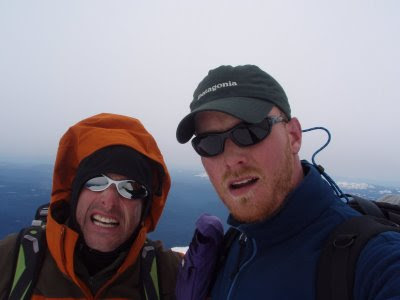 Summit time was pretty short we were, after all. practically out of water, and behind schedule, so we turned around, sat down and let gravity do the work. 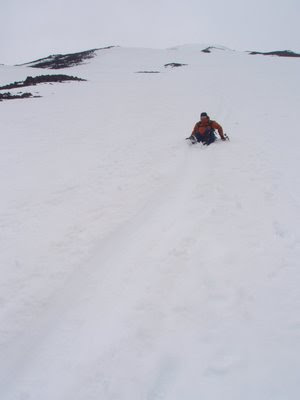 We made it out that night, and spent the night at the general store in Trout Lake. I ate a whole bag of Doritos© and drank excessive amounts of water, and a few beers.
Mt. Hood...
After a couple of days of rest we found ourselves in the parking lot of the Timberline Lodge at the base of Mt. Hood's South Side route (after spending the day in one of the most annoying places in the world, Government Camp, Oregon, where super-rad-gnar-gnar 12 year-old kids hang out at their snowboard camp imagining themselves as quite possibly as bad ass as it gets). We left at about midnight, just as the snowcats were leaving to haul the local guiding company's clients up to the top of the ski hill. Those of us that were there on our own buttoned up to enjoy the long grinding hike up the edge of the snowfield. Every ten minutes or so another snowcat full of clients would pass us, which was at times energizing ("We're doing it for real.") and at times demoralizing ("Why didn't we sign up for a snowcat ride?"). 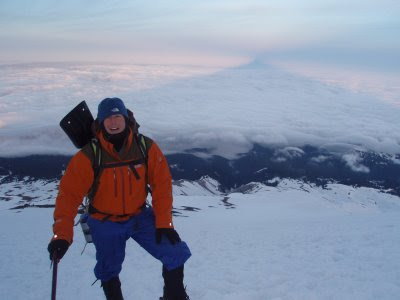 We reached the caldera early enough in the morning, but the sun was starting to come around and hit the upper reaches of the ridge, and there was a giant log jam of guided clients on the upper slopes. Todd was having second thoughts about things because of all the people and I certainly didn't blame him for that. I suggested we press on to the Hogsback (a snow ridge that runs from Crater Rock up to the summit ridge), have a snack, and re-evaluate.
The last time I was on Hood before this trip (1999) the Hogsback went directly up to the Pearly Gates, making for any easy dash to the summit, but since then it has shifted West making the Old Chute route more accessible, and as a result the current favorite route of the guide companies. So the Old Chute was a mess of clients and guides, six to a rope, no gear and rope team upon rope team right above each other. This situation has caused accidents before. Todd and I agreed that this was not the way to approach the mountain. Luckily we had brought a rope, and some protection, so our options remained open. We decided to strip the gear down into one pack, and "have a look" at the Pearly Gates. We crossed the bergschrund in a hurry and headed into the coulior. The climbing was solid, and we simul-climbed it for the most part. I stopped once mid-route to belay Todd up and re-rack the gear he had cleaned. At the top I stopped again and belayed Todd up the final hundred feet or so, and it was a good thing too, since he blew a crampon about twenty feet from the top of the coulior. Some tense words were exchanged, but eventually he found a good spot to stop and re-attach it. The last few hundred feet to the summit were a relatively easy walk, and we topped out happily away from the crowds which had already begun their descent. 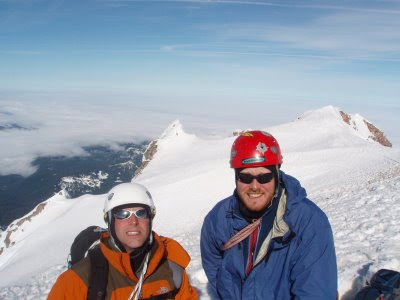 The fun wasn't quite over yet though. Since the sun was starting to shine fully on the inside of the caldera and the guided parties were mostly on their way down we decided to go down the Old Chute route. A small section of knife-edge, the chunk of ice that melted off the rim and sailed into me, and the slow party in front of us provided a little pucker factor to the descent, but eventually we made it back to the hogsback, had a snack, and continued on down without any real issue. We made it back to the car about eleven hours and forty-five minutes after we departed, which I thought was a respectable time for us to do it in.


We spent the rest of the trip hanging out in Hood River and Trout Lake, relaxing and enjoying the weather.
Posted by James