I spent October 9th-14th in New Hampshire. It would be remiss of me to simply call it a climbing trip - it was much more than that. My friends Jay and Kayte not only showed me some of the best climbing New Hampshire has to offer, but also welcomed me into their home and introduced me to their beautiful new daughter, June, and loving pup, Topher.

Jay picked me up Thursday at the Manchester, NH airport at noon. We headed straight to Rumney from there. I can confirm that Rumney is as steep as it is rumored to be, and that, to a midwesterner accustomed to vertical crimping at Devil's Lake, Rumney is, in fact, otherworldly. The steep climbing on good holds is fun, pumpy and oddly technical. Thursday afternoon included ascents of Underdog (5.10a), Armed and Dangerous, and Off My Medication (5.10b), Masterpiece (5.10a) and Clip a Dee Doo Dah (5.3). All the routes were a blast, but our end-of-the-day romp up Clip a Dee Doo Dah was a highlight - fun climbing in an amazing setting.


After the day of climbing was over, we headed back to Jay and Kayte's house where I was lucky enough to meet their beautiful new baby June. I was quickly introduced to the nightly June Bug dance party.
Friday dawned early and Jay and I headed back to Rumney. We both repeated Masterpiece (5.10a) to warm up, and then headed straight to Waimea. My target for the day was Technosurfing (5.12b) an amazing route, on which I hoped to just flesh-out a few of the moves, but had no expectation of sending. The effort started with Jay taking a quick lap on it so I could see the beta, he (as he does with most things) made it look easy. I made a total of three attempts on the route, and while I made progress each time, repeated attempts on its powerful moves started to take a toll. Between my attempts, Jay made quick work of Waimea classics Whip Tide (5.12b) and Suburban (5.13a),  he also made a, in his words, "half-hearted" attempt on Charlie Don't Surf (5.13b). Having spent a few hours at Waimea and thoroughly trashing ourselves, Jay took me up to Jimmy Cliff to introduce to his friend Ladd. I have known Ladd for several years on the internet, but was psyched to finally meet him in person. We all took a few tries on Things as They Are Now (5.12a) - I think Jay was the only one of us to send. On the way back to the car we stopped at the Black Jack Boulders to check out the mega-classic Zig Zag Crack (V1). 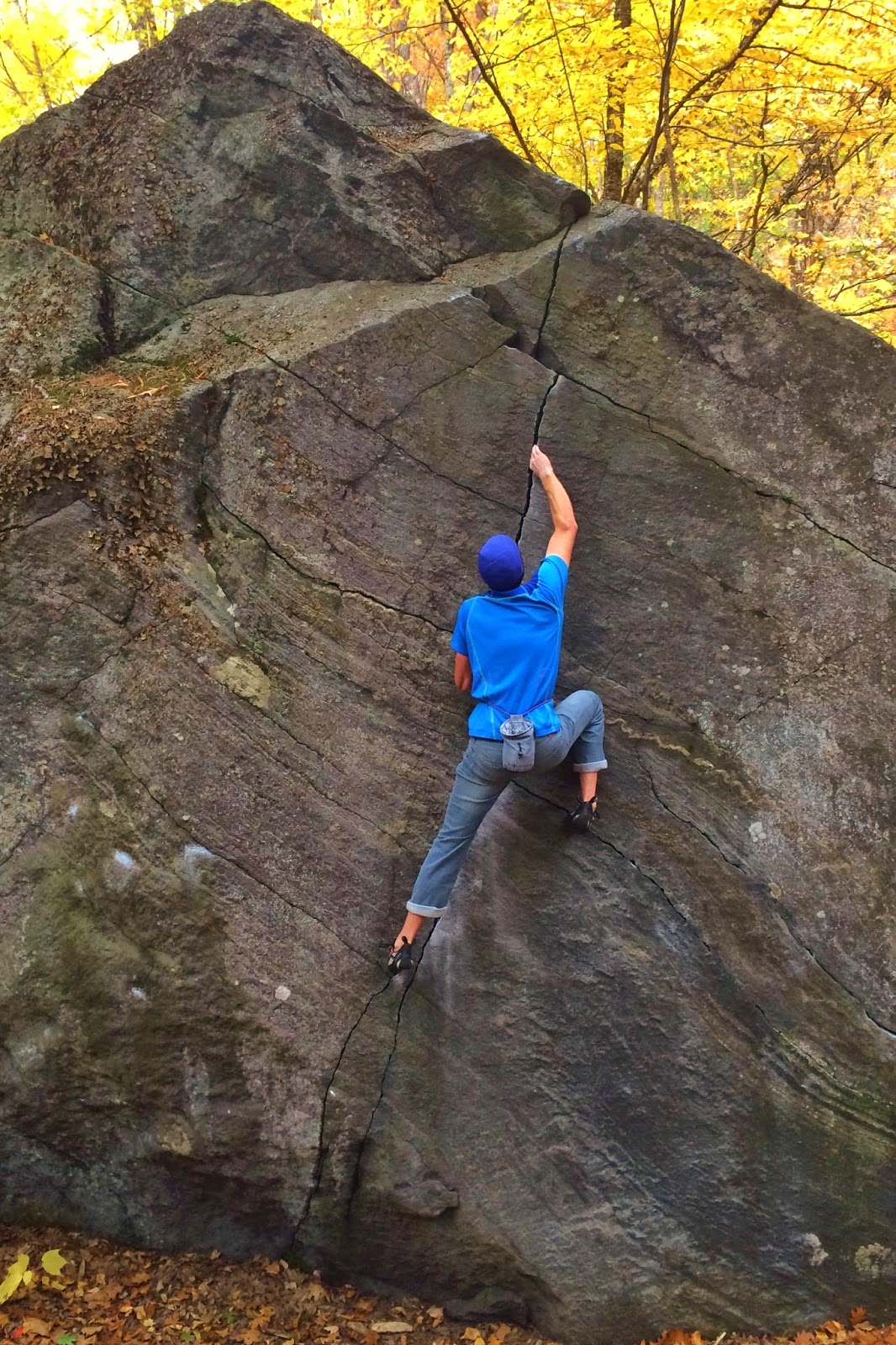 We all had a good session, with a pair of new routes being added to a wall around the corner from the main area. Kayte added Root Route (V1/2), and I added Whale and Moan (V5+).
After Kayte left for the afternoon, Jay and I loaded our packs and headed into the Waterville Valley backcountry looking for adventure and more new boulder problems. The weather and fall colors were perfect, and a Saturday night away from the crowds was all that we could ask for.

While we were hiking in, our friend Yan was driving down from Quebec to join us for the evening. So aside finding and preparing an acceptable campsite, we had to mark the cut-off from the main trail to our hidden site. Yan found us just before sunset, thanks largely to the amazing job of cairn building by me.
We spent the night trading tales of the past and plans for the future. As the night slipped on, each tale became taller, and each plan became bolder, as if fed by those that preceded it. It was one of the best nights of the trip, and while nary a single hold was pulled on, a bottle of 18 year old scotch managed to disappear. We slept that night on boulder pads scattered around a fire burning beneath the smooth, overhanging face of a massive boulder - it was the stuff of myth and legend, and we, as we have always done, lived it.

Saturday night legends are often slow to start on Sunday mornings, and we were no different. Facing a long drive, Yan split early, but Jay and I remained and attempted to do some climbing. Jay had previously cleaned a highball slab problem and next to that an amazing looking highball crack problem. We played on the start (technical crux) of the highball slab for a while. Eventually I committed to a few more moves, but jumped off when faced with a committing high-step onto a rounded hold far enough off the deck to get my attention. Jay jumped on and fired it to the top, dubbing it, Yolo Slab (V2/3 PG13/R). Next on the list was the crack problem, but faced with an awful looking landing, we both opted for the protection of a top rope - so this excellent V3 R crack problem still awaits a name and, more importantly, a bold first-ascensionist. We did a little more exploring, and Jay made a good effort on another project, but came up short. We were tired, three straight days of climbing and one late night of chasing our youth had taken their toll - we loaded our packs and started on the trail home.

We spent Sunday afternoon lazily. We watched the Packer game, ate, and did our best to recover. There was frequent discussion about where to go on Monday, but no real decisions were made. When morning rolled around on Monday, we had the beginnings of a plan, which was essentially to avoid Rumney, since it was Canadian Thanksgiving and Jay thought Rumney would be overrun. Jay had been wanting to show me the Yellowjacket Boulder in the Waterville Valley, so he, Kayte and I loaded up the crash pads and headed there - Ladd, whom I had first in person met on Friday would meet us there later in the afternoon.

The Yellowjacket Boulder, and its satellites are amazing! So many good problems on such high-quality stone. The highlight for me was Trillium (V5), an excellent problem. I did several others that day Cavaletti (V0), Rock Shop (V2), and The Bottom Falls Out (V3).  I also made a few top rope attempts on The Big Short (V5) - an amazing highball problem that will have to wait until the next time I am in New Hampshire. Kayte, Jay and Ladd each did a number of problems that day, but I cannot recall who did what.
On the way back to the car Jay and I discussed the plan for Tuesday. We talked about hitting some of New Hampshire's big granite, but, given my flight schedule for Tuesday, we decided Rumney would be lower-pressure, and therefore more fun. So Tuesday was a Rumney day, we did a bunch of stuff, the highlight for me was an onsight of the first pitch of Tropicana (5.11a). It was a whirlwind of activity compressed into six days. All-told I had a blast hanging with my old friends, meeting their beautiful daughter and of course climbing.
Posted by James